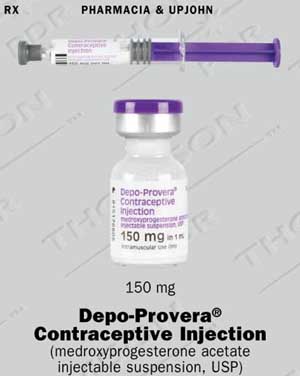 The Depo-Provera® Contraceptive Injection is a "shot" whose active ingredient is medroxyprogesterone acetate, a derivative of progesterone. It is only indicated for the prevention of pregnancy. It is given every 3 months as an intramuscular injection and is frequently abbreviated as DMPA.

In five clinical studies using DMPA, the 12-month failure rate for the group of women treated with Depo-Provera® was zero (no pregnancies reported)

Who should not use the Depo-Provera injection?

Side Effects of Depo-Provera®

In the Dec. 29, 2004 issue of Fertility and Sterility, a large study found that Depo-Provera® (DMPA) causes a significant loss of bone mineral density (BMD) and additionally, the longer that a woman uses Depo-Provera®, the greater is the amount of bone loss. Thus, bone loss is greater with increasing duration of use and the lost bone may not be completely reversible. The published data indicated that hip and spine BMD declined after one DMPA injection and this decline continued with each subsequent injection for 24 months. Although the rate of spine bone mineral density loss decreased after 18 months, this was not true for the hip. In the hip study group, the lose of bone remained linear for the entire 24-month study, suggesting that BMD could decrease even further with prolonged DMPA use. Therefore, Depo-Provera® should be used as a long-term birth control method (e.g. longer than 2 years) only if other birth control methods are inadequate.

Most women using Depo-Provera® experience alterations in their usual menstrual bleeding patterns. Altered menstrual bleeding patterns include irregular or unpredictable bleeding or spotting, or rarely, heavy or continuous bleeding. If abnormal bleeding persists or is severe, then an appointment with your physician hould be scheduled so that an evaluation can be started to rule out the possibility of uterine abnormalities. Appropriate treatment should be instituted when necessary.

The following adverse reactions were reported by more than 5% of patients: